I took control of my fertility with OvuSense, and now I’m pregnant 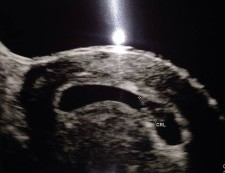 My name is Gemma and here is my story…

I’m 32, and have been married to my lovely husband for 5 years. We met in school and have been together about 17 years. We had been trying for a baby for about a year, and went to my doctor as recommended, through blood tests and scans I was diagnosed with PCOS.

My first doctor was very unsympathetic, and prescribed a couple of months of Clomid (without monitoring). I was testing for ovulation myself, and also temping and knew that I wasn’t ovulating but she was very reluctant to send me for any monitoring. Eventually I got frustrated and changed doctors surgeries. My next doctor was a lot more sympathetic and got me a referral for a fertility doctor.

Under the fertility consultants care I went through several months of Clomid, and also a ‘lap-and-dye’ operation. None of this seemed to work. However against all the odds, I had my first positive pregnancy test on my very last Clomid cycle, just before being referred for the next step IVF. Unfortunately this pregnancy wasn’t to be and after a extremely bad diagnosis at the anomaly scan, I miscarried when my baby was 21 weeks.

At this point, I knew that I really didn’t want to take another potential 5 yeas to get my ‘take home baby’. So I started researching other methods of conceiving naturally – it was then I found OvuSense online. I started looking around the website – then moved on to ‘googling’ to try and find more information and reviews. I ended up joining the Facebook site, and from there I was sold!!!

With OvuSense, I learned that actually I did ovulate and, as I suspected, considerably later than I thought! I realized that we were focusing far to much on the earlier days of the cycle, and ‘burning out’ as we approached my real fertile days, meaning that we were missing ovulation each time.

Armed with this information from OvuSense, we started having intercourse a week or so later, and every other day – meaning that there was no chance of getting fed up and giving up to early! I used the OvuSense monitor for 3 months – ovulated each time – 2nd month had a positive pregnancy, but it was a chemical, next month got pregnant again – I’m now 20 weeks, thanks to OvuSense.

In addition to using OvuSense, I firmly believe that it was a mixture of things that led to me to getting pregnant – I had recently started a intense exercise regime which involved strengthening my body with weights, also found a love of running – running at least 5K three or four times a week. I have recently discovered that strength exercises can help with PCOS which I didn’t know at the time.

Due to the amount of exercise I was doing I needed to ensure that my body had the correct amount of calories, so I was monitoring my calories intake and burn to ensure that I wasn’t starving my body.

The added confidence of exercise (and knowing when I ovulated) helped my feel better about myself and have a focus which wasn’t solely based around my fertility.

I found that the lack of control, and putting my fertility in the hands of others (doctors, fertility consultants, nurses etc) an extremely hard and intrusive thing to do. Out of everything I think this is the thing that I struggled most with. I wanted the conception of my children to be beautiful and natural, and hated that the control was completely taken away from me. OvuSense helped me to feel more in control of my fertility.

My advice would be to take back control of your own body and fertility – learn about how your body works, through OvuSense.

Best of luck to all ladies who are going through the same thing.